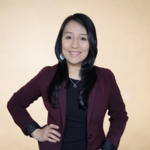 As an entrepreneur herself and an immigrant, Giselle knows precisely how to counsel clients and serve them with excellence. Giselle Ayala Mateus was born in 1991 in Bogotá - Colombia. Her mother is a district attorney in Colombia. Her father is a retired Colombian attorney and community health worker with Planned Parenthood in New York City.

After finishing law school in Colombia and being admitted to practice law in this country, Giselle came to the United States to complete a Masters of Laws with the Brooklyn Law School. While being a single mom law school student in the U.S., Giselle completed her studies and a Business Law specialization. ​ As part of her legal education in the U.S., Giselle worked with Good Counsel Services; a nonprofit organization focused on educating and empowering nonprofits and social entrepreneurs.

In 2018, Giselle created FOCUS, a not-for-profit project focused on supporting Latinoamerican entrepreneurs and artists. Giselle was admitted to practice law in New York in 2019. Since then, she has served as counsel and representative on issues related to the review and drafting of commercial contracts, creative developments, transfer of intangible rights, and business formation in the United States.  Giselle has also performed as a leading attorney in the adjustment of status processes, asylum applications, work visas, interviews with immigration officials, presentations, and foreign documents validation.

Likewise, she has worked as a simultaneous interpreter for family processes, immigration, and application for public benefits. On March 27th, 2021, during the celebration of Latin Women, titled "Powerful Women", Giselle was recognized by the New York State Assembly with a Certificate of Merit for Outstanding Achievement Entrepreneur.

Dedicated to her clients and her law practice, Giselle is currently communicating to her audience via social media, Facebook, Youtube, Quora, and more. Her service-oriented approach has lead her to where she is now. Giselle is a current member of the New York State Bar (NYSBA), the American Immigration Lawyers Association (AILA), the FAME Center for Fashion, Art, Media & Entertainment Law of Cardozo Law School, and the American Intellectual Property Law Association.