One of the key principles guiding the U.S. immigration system has been admitting foreign workers with skills that are valuable to the U.S. economy. Accordingly, current the U.S. immigration law provides several paths for foreign workers to enter the country for employment purposes. Employment visas, also known as temporary worker visas are for persons who want to enter the United States for employment lasting a fixed period of time and are not considered permanent or indefinite. Each of these visas requires the prospective employer to first file a petition with U.S. Citizenship and Immigration Services (USCIS). An approved petition is required to apply for a work visa. Read more...

Temporary worker visas are for persons who want to enter the United States for employment lasting a fixed period of time. Each of these visas requires the prospective employer to first file a petition with U.S. Citizenship and Immigration Services (USCIS). The first part of the process is completed by filing for I-129. Considering that the fiscal year to start working in the U.S. starts in October, employers must plan ahead. At least a year before the petition is the ideal time.

The primary form I-129 asks for information about the employer and the position to be filled by the foreign national. The form must be accompanied by supporting documentation, such as the incorporation documents of the employer, authorization to do business, corporate minutes reflecting the decision to hire the foreign national, internal documents with the description of the position, brochures, corporate or organizational charts, financial statements. among others. 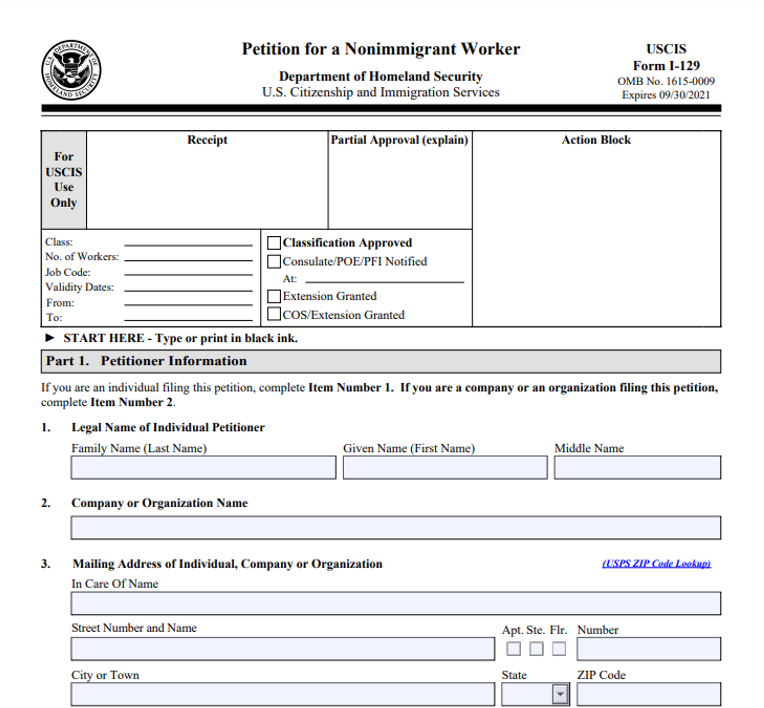 Regarding the petition of the dependents of the workers, dependents of employer-sponsored foreign nationals are responsible for securing their dependent visa independently If the dependent is in the United States, Form I-539 Application to Extend/Change Nonimmigrant Status must be prepared for that person. Form I-539 can be submitted together with the employer's I-129 petition, or at a later date after the I-129 petition has been received. On the other hand, if the dependent is outside the United States, the dependent can apply for a visa at the U.S. consulate. In this case, together with the application, the dependent will have to provide a copy of the I-797 approval notice for the I-129 and proof of the relationship with the primary visa holder.

The CNMI-Only Transitional Worker (CW-1) visa classification allows employers in the Commonwealth of the Northern Mariana Islands (CNMI) to apply for permission to employ aliens who are otherwise ineligible to work under other nonimmigrant worker categories.